We wondered why an owl flew out of the quonset every time we walked past the door. Does it have a nest in there? I looked around briefly but didn’t find anything. About a week later, and after seeing and hearing a pair of owls near the dugout, we both went to look for a nest. Richard spotted it on top of a 45 gallon barrel by the wall and I headed to the house to get the gopro (it has no lights and makes no sounds) and a tripod. It’s not everyday that a pair of great horned owls decide to nest in our quonset, so even though the quality of pictures is lacking, I thought this was worthy of a blog post. That evening, I set up the gopro about 5 feet away and set it to take a shot every 60 seconds. I left it all night while the battery ran out. The next morning, I went through the shots and picked out a couple of my favourites. For this post, I chose the above shot of the two owlets and this shot of one of the parents below. Most definitely great horned owls!

But retrieving the gopro each day, would surely disturb the owls too much, so I called Shawn. We decided to sacrifice the wifi power line from the basement printer and our old router to run the owl cam in the quonset. Shawn set it up quickly and I placed the 1080p webcam. Now we can tune in and watch them anytime our network allows. 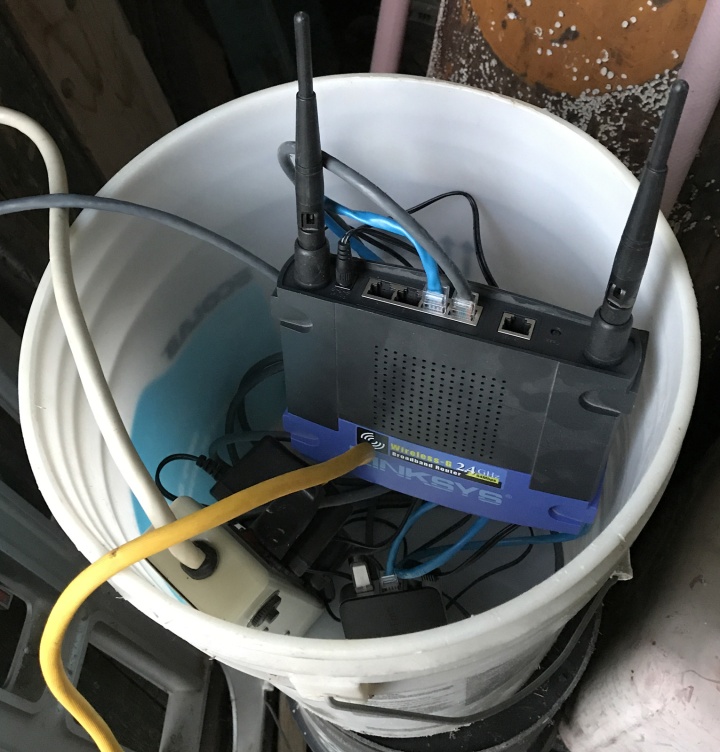 Below is a video of a parent owl returning to the nest to feed the owlets, then the two young ones play a little bit before falling asleep. Too cute! [May 11, 2017]

They are sure growing! And beginning to show owl plumage. We managed to find a close up shot of one parent bringing a rodent. The problem happened when he took off from beside the camera – he knocked it off – twice. So we were without our evening entertainment one night. The next day, I reset the camera and we saw lots more interaction. We love watching them. Below are some highlights this week’s footage:

These baby owls are growing like weeds! The nest is full when a parent comes to deliver a meal. This week, the young ones began clumsily stepping onto the pipes that lay across the nest – we call it the “branch”. They also continue to flap their wings for balance and exercise, I suppose.  We are feeling like proud parents – that is until one baby pushes the other out of the nest! Our morning check of the HooCam revealed only one in the nest. Oh no! Richard managed to find and return it to the nest tired, hungry and maybe a little bruised. At least it didn’t fall from way up a tree. Check out the highlights of this week below:

It’s so much fun to watch them grow. I’m in awe every week at their latest antics and this week was no exception. This week they’re really on the move learning how to shinny across the branch lead them to a whole new world on the seed bag that the camera sits on. Again, we couldn’t see what they were doing – but they managed to get back to the nest on their own so we stayed away. At least until they knocked the camera and we had to reset it again. I have to thank Richard and Shawn for grabbing video when they see the owls doing something new and exciting. I wonder how much longer they will need this nest?

UPDATE: [Jun 11, 2017] Just after last week’s episode, the babies left the nest. We think because we added another camera and disturbed them too much. We did return to find the babies had just relocated to a new nest further back in the quonset and they were doing just fine but hissed and clicked their beaks at us when we found them. Nevertheless, we have no video update this week.

No video in week 5

UPDATE: [Jun 17, 2017] In this sixth week we’ve been watching, our owl babies have grown up and flown the coop. Here are some clips of them as they leave the safety of the quonset. The wall they sit on is what Richard built across the door to keep predators out after the one fell from the nest in HooCam3. I guess they found it a useful perch before heading out on their own. I particularly like the part where one of the adults still brings them a mouse.