We had a pair of great horned owls nest in our quonset last spring. They successfully raised two young ones and we were enthralled to watch their progress via webcam. That was season 1.  In their absence, we didn’t change or clean anything. 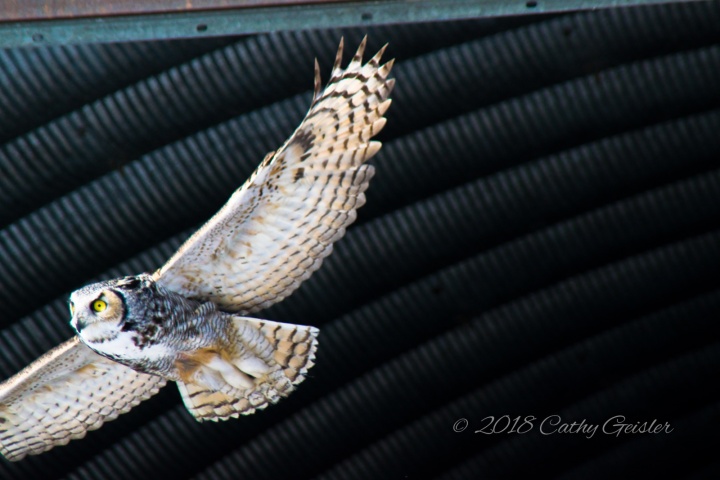 Richard and Ryan first noticed her flying on Mar 13. We were ecstatic to learn they have returned this year! A few days later, I had to see if I could get some shots with my camera – it’s not as easy as you’d think.

And they have two eggs again! It doesn’t look like much of a nest, but it does the job.

Whenever we go outside, we hear Papa Hoo hooting from the dugout. I suppose he’s alerting her that there is some action in the neighbourhood. And if we go near the quonset door, Mama Hoo flies out of the quonset and joins Papa by the dugout. 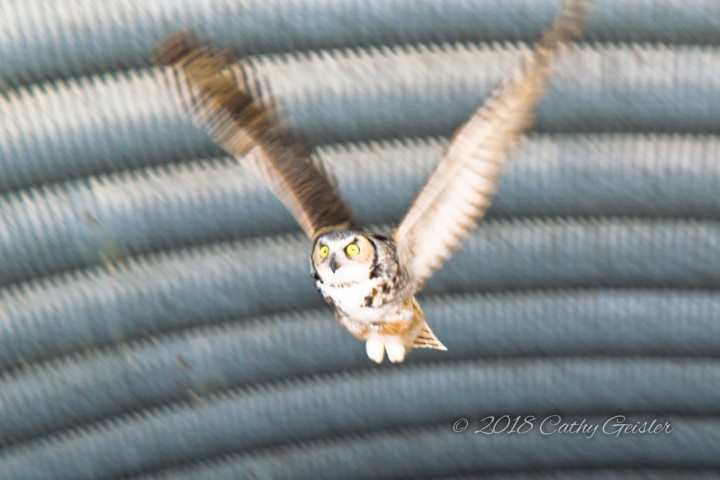 We couldn’t coordinate extending our network to the quonset until today, Apr 2. We didn’t really want to disturb Mama Hoo during the cold weather (-6C) but also didn’t want to miss the hatching. Shawn set up the network and I mounted the cameras and we were finished in record time today (less than 5 minutes). Mama Hoo returned to her nest on top of the 45 gallon drum full of sweet clover seed and didn’t seem to mind the cameras at all.

She settled right in. And the highlight for me was when Papa Hoo brought her some dinner! Listen to them chatter!

It appears she’s using the pipes as a pillow. I guess she’s bored from sitting on those eggs all day – or maybe tired from the paparazzi chasing her;)

Hopefully we get all the bugs worked out of this system and straighten the cameras before they hatch. And hopefully the weather warms up for them. Until next episode…