While researching information about the Wave in Arizona, I came across another gem called White Pocket. Our crew decided to visit the little known White Pocket the day before the Wave as we would pass by the Wave’s trailhead on our way and it sounded like a super cool spot that few have seen. It would be Day 2 of our 3 day excursion to Page, AZ. The blog post I read said we would need a 4WD high clearance vehicle, so we rented one from Carl’s Marine & Jeep Rentals in Page. There is so much to see around Page!

Carl was great! He let us know the road conditions were good since he had been there recently and there hadn’t been much snow. The last part of the drive was through a foot of deep, loose sand. After a 2.5 hour drive from Page, we parked at the second parking lot, just a bit further north from White Pocket’s main parking lot. 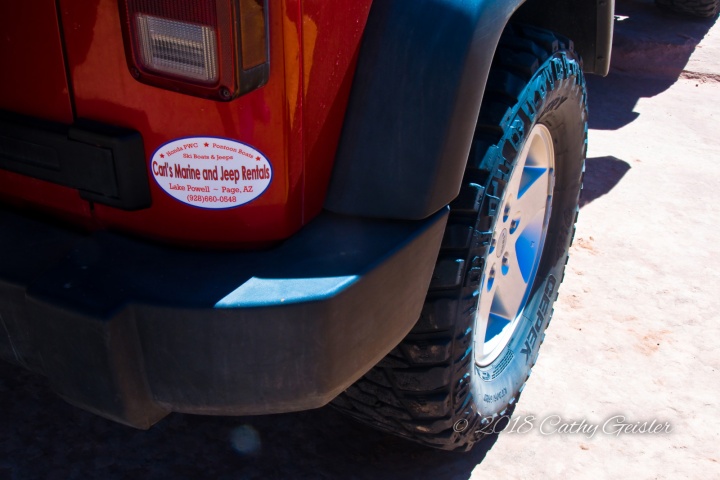 It is true that AWD and 2WD would NOT make it – so glad we had the Jeep.

We hiked onto the white sandstone and enjoyed the view toward Utah in the distance.

During the drought, the pool dried up and had some grass growing in it.

The rest of my crew was enjoying the view to the northwest. 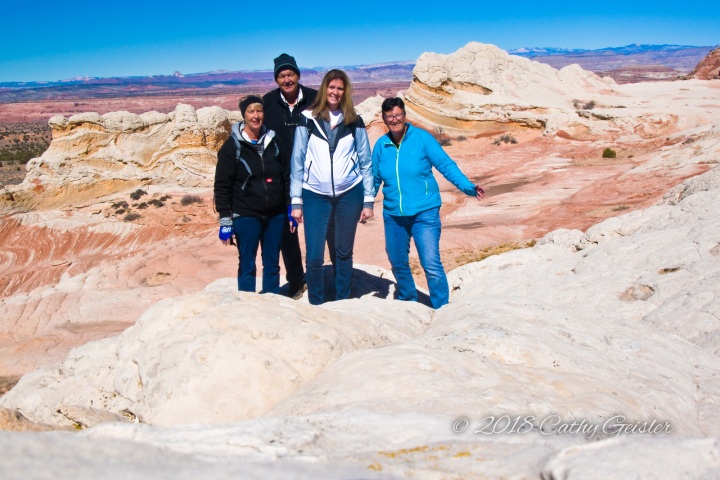 We left the Valley of the Sun at 80F and dressed in layers for this 50F sunny day in northern AZ. Great company made this trip so much fun!

Looking northwest, shows the Bryce Canyon area in the distance.

This old guy was keeping an eye on things around here.

These wind sculpted fins were shading the north side. Imagine the brunt of sandblasting they must have taken. 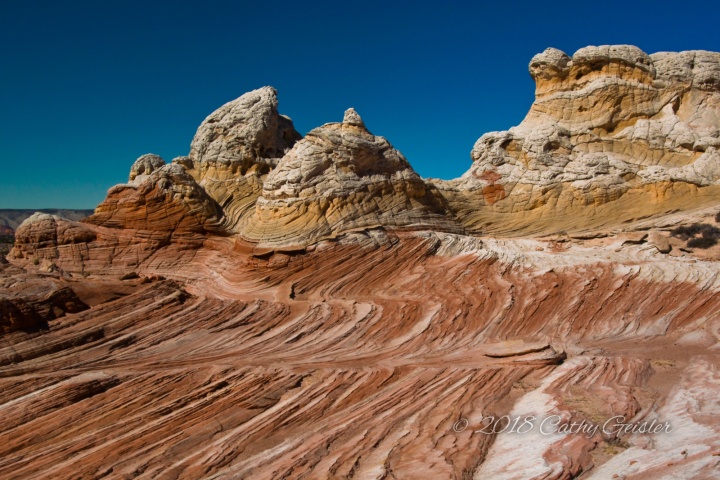 The colours were amazing. Red and pink colours are attributed to the presence of hematite, an iron-bearing mineral, within the sandstone. Limonite and geothite produce the yellows and browns. 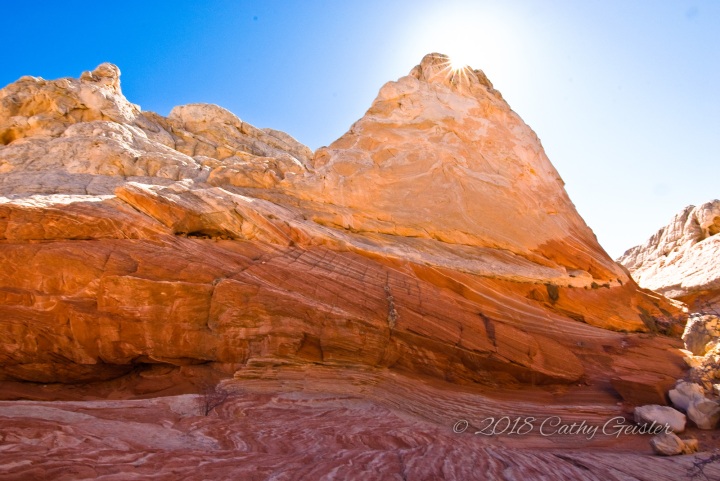 With evidence of faulting on the floor, we stopped here for a bite to eat.

Just around the corner was this sweet swirl! Just amazing! Apparently this was due to an exceptional exposure of unusually soft sediment deformation and slumping. The deformation occurs when separated layers are folded or sheared due to gravity, earthquakes and changes in ground water.

The wind blows sand around this corner sculpting these interesting little fins. 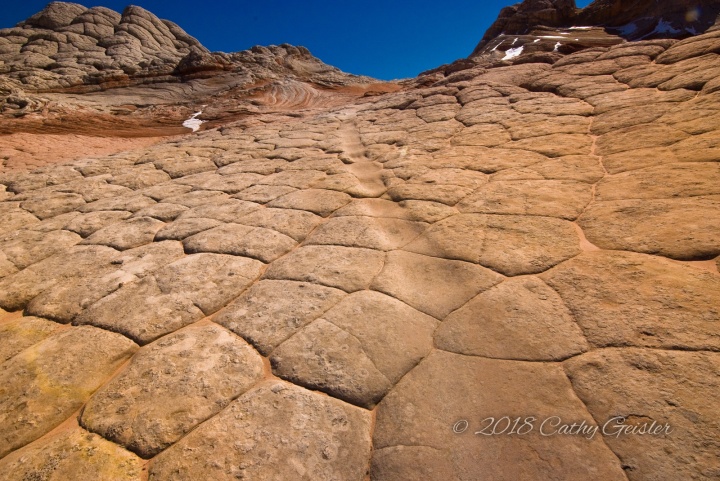 Most of the surface of White Pocket is this polygonally cracked sandstone, but we found this smooth slide in the north area. Then we walked back to the Jeep and drove back to the first parking lot. 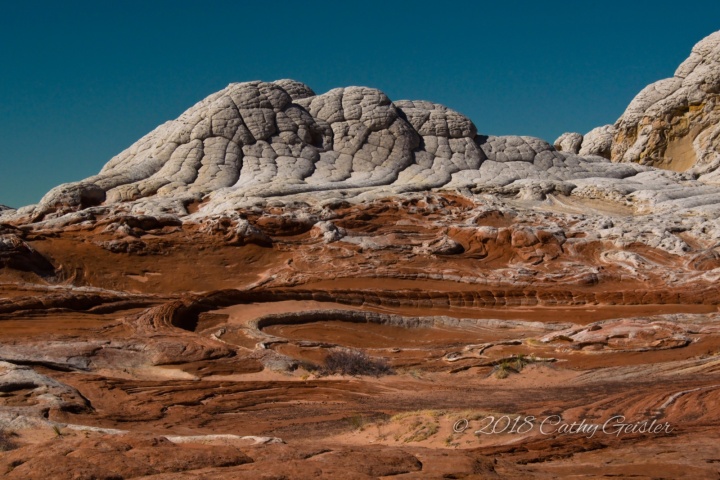 The White Pocket area was a large dune field of fine quartz that was cemented by calcium carbonate 190 million years ago. The polygonal cracks were caused by tensile stress probably from thermal contraction, moisture cycles and the drying of the sediments.

There were interesting shapes seemingly embossed in the surface of the sandstone. Love it!

Apparently, ancient insects and spiders left evidence of their existence in what were once sand dunes. Bio-turbation mixed the sediments in their burrows leaving these cool designs to be exposed for us all over the polygonal cracks.

There was a deep pool that was empty of water, but surely this could be a hot tub in the right conditions.

We actually found the top of the slot where we had seen the swirl earlier! What a fantastic view!

Wendy and Marybeth are waiting for me to finish taking pictures. 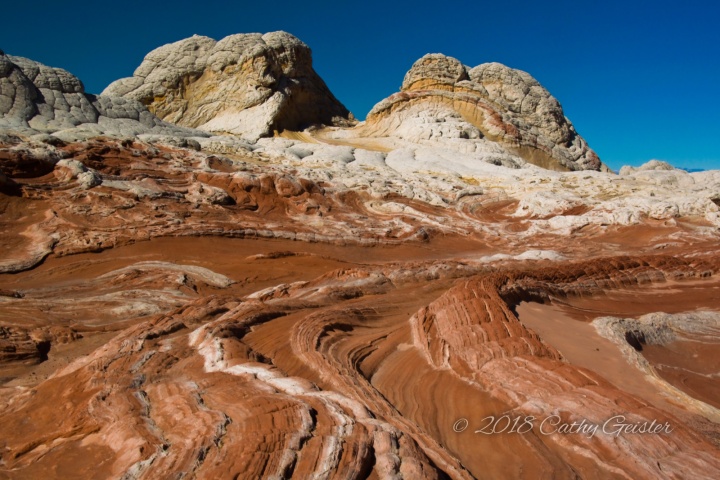 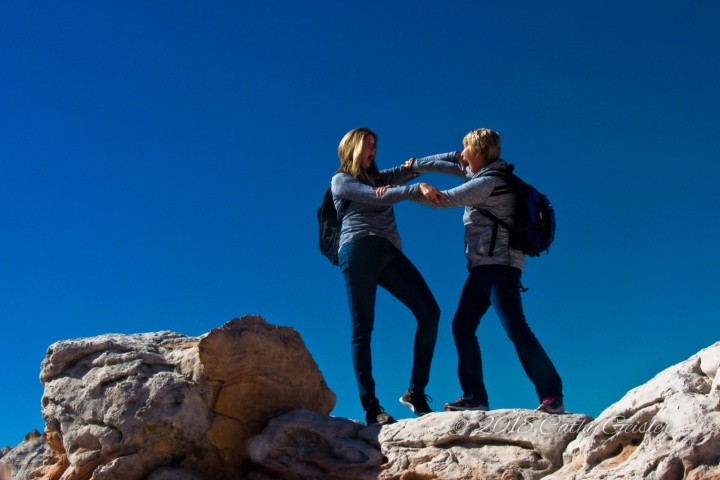 These two were horsing around on a rock.

Wendy was being too careful and took a tumble. She left some dna on the rock but Marybeth fixed her up.

We decided to head back to the Jeep.

But had to stop for a hamburger on the way. Just kidding! Back at Page, we had a bite at Big John’s Texas Barbecue and then headed to the hotel to rest up for the Wave!

According to Fitbit, our 2 mile hike at White Pocket was 6,500 steps 95 flights of stairs and took just over 3 hours.

The best thing about this hike was that we were the only ones there and had it all to ourselves! It was awesome! When we returned the Jeep, Carl told us he was planning to lead camping tours to Paria Canyon in the summer of 2018. Wouldn’t that be a great place for night photography?!