When you need to get out of the city and enjoy some solitude, San Tan Mountain Regional Park is a favourite for hiking in the desert. It’s a nice little valley surrounded by the San Tans so, there are no power lines, few people and the only buildings are at the visitor center.

On a sunny day after a rain, the nectar oozes from the tip of the agave plant. This is the variegated type and you notice the sharp tips when moving too close. Watch for scorpions around the base!

I was drawn to the shadow of the needles from the left and the contrast with the actual ones on the right.

Orange ocotillo blooms as early as January in the valley. Until recently, the leafless stems appear to be dead spikey sticks. We have learned that early ranchers used the ocotillo stems like barbed wire in their corrals. The iconic healthy saguaro behind on the right sprouts its first branch at age 50 years. Occasionally when temperatures dip below freezing, arms of the saguaro twist, droop and die.

A decaying saguaro points to a younger thriving example.

Saguaro reaches for the sky. I’d swear John Wayne is standing beside me “Stick ’em up!”

A tangle of spines on a fish hook barrel cactus. Some of them have brightly coloured spines and that’s what draws my eye. 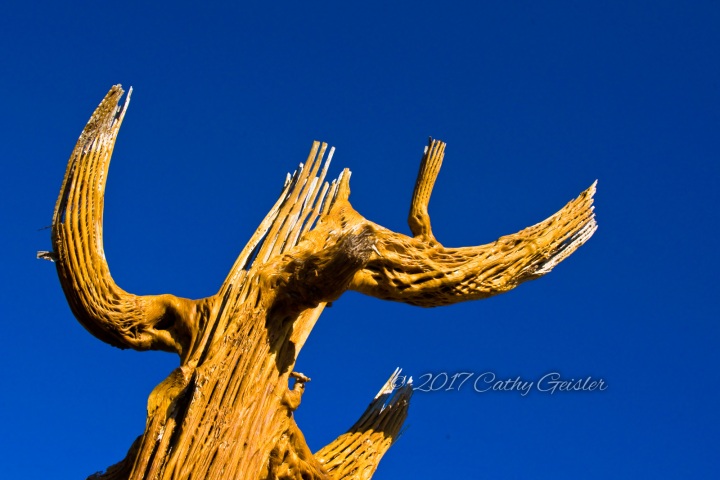 Near the visitor center, they’ve painted this saguaro skeleton with an orange stain – normally it would appear lighter. It sure compliments the blue Arizona sky.

The elusive roadrunner wouldn’t pose with his long tail, so I’ll settle for this shot. He quickly disappeared behind the bush. He was about ten inches tall – not four feet like the cartoon we remember;)

Although it is in Pinal County, it is grouped with the Maricopa County Parks. And now that I have been to 3 of 13, San Tan Regional Park is still my favourite hiking spot in the valley. Until next time…